Kanban Maturity and A Technique for Visualizing It

I received a great question from one of my webinar attendees and this question has also received a bunch of attention from the Kanban community since this visualization first surfaced in the summer of 2012 ago at the Kanban Leadership Retreat in Austria.

How do we measure our maturity using the Kanban method? 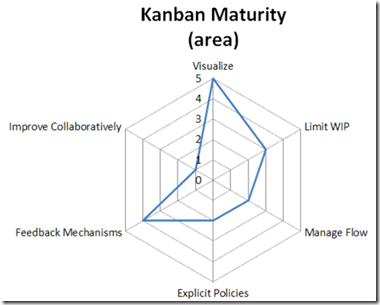 I have used the technique that came out of Mayrhofen at #KLRAT as the basis for how I work with teams to monitor Kanban maturity. There isn’t a “standard” set of questions that the Kanban community uses in the creation of the kiveat chart.  In general, it is being suggested that each team/coach comes up with a context-specific way of measuring and ranking maturity within the 6 practice groups that applies to “that team”. That visualization can then be used to monitor the anticipated growth for that team over the course of time. One thing that the Kanban community is cautious about though is “comparisons” between kiveat charts and assessments. Since each assessment is relatively subjective, comparisons should be avoided as it would be hard to compare and may potentially be misleading to the team.

That said, here is how I use the chart.

I have a set of questions I ask per category. On a scale of 1 to 5, 1 being “We do not do that”, 3 being “We do that”, 5 being “We could teach someone to do that”, I look for activities that would allow me to select one of those values for one of my questions. As an example:

My Limit WIP category currently has 5 questions, so 15 points/5 questions would give me a 3 Limit WIP ranking on the chart.

Following this pattern, I eventually end up with 6 axis on the kiveat chart, all ranked from 1 to 5 and this “coverage” can be used to describe the team’s Kanban maturity from my perspective.

David Anderson, in some of the slides I’ve seen him use and in talking to him, describes a progression of novice to experienced tactics within each category and each of his axis has different scales to represent the increasing maturity on that scale. He does arrive at the same kind of coverage visual and describes that coverage as an indicator of maturity from his perspective. My kiveat chart and David’s would not be comparable though and this is completely OK and encouraged. As I mentioned above, the current thoughts within the Kanban community are to discourage direct comparisons between these kiveat charts.

What kinds of questions would you use to measure you’re companies Kanban maturity?